IT Providers Not Unanimously Against Putin

There were different answers to my small inquiry with the suppliers of industrial software regarding their attitude to the further business with the aggressor Putin. The clearest are those of PTC and Autodesk, which have discontinued their entire business in Russia. 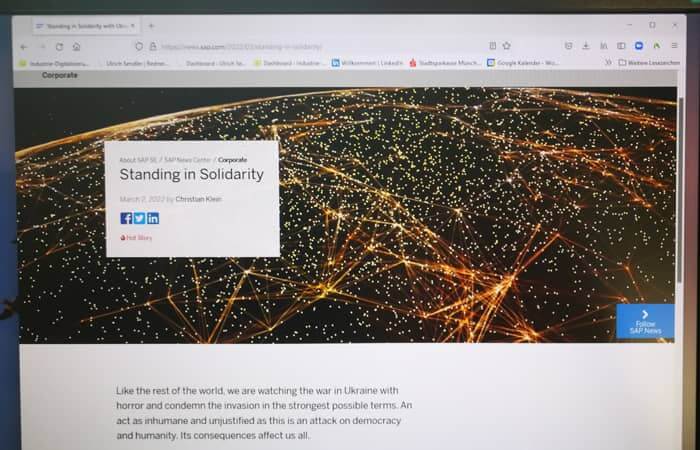 In no declaration is the war called war. Everywhere there is talk of conflict and crisis. Apparently, the companies even fear disadvantages for their employees in Russia if they do not submit to Putin’s diction.

At Bentley Systems, no decision has yet been made about how to proceed. There is also no statement from Eplan yet. The Procad Group has stopped all deliveries and services from Russia with effect from February 27. Aras has no subscribers in Russia. Siemens and Dassault Systèmes have expressed concern and announced they will not do any new business with Russia. But that presumably means, conversely, that current installations will continue to receive support.

In the case of SAP (screenshot from the homepage), this is particularly clear. SAP has only reacted to an explicit request from Ukraine, but in a shamefully reserved manner. Russia’s support is by no means discontinued to the necessary extent.  On 8.3. the Rhein-Neckar-Zeitung wrote:

“Ukraine appeals to SAP: Ukrainian Deputy Prime Minister and Minister of Digital Transformation Mykhailo Fedorov has appealed to Walldorf-based SAP to tighten its measures in Russia announced last week. “Thank you to SAP for stopping sales in Russia,” he wrote on the Twitter messaging service. “But this is not enough! The army of bloody invaders continues to kill our civilians. We ask you to stop supporting SAP products as long as Russian tanks and missiles attack Ukraine!”

An SAP spokesman would not comment on the Ukrainian vice president’s renewed push Monday. Fedorov had already addressed SAP last week. Modern technology in 2022 is also the way “we can defend our country and our citizens, and that’s why we need your support,” he wrote in an open letter. Therefore, he said, it is hoped that SAP will not only listen, but also do everything possible to protect Ukraine, Europe and ultimately the whole world from bloody Russian aggression. “Therefore, I appeal to you to stop providing SAP services and products until Putin’s attack on our country is over.”

SAP CEO Christian Klein had responded by announcing that he was shutting down business in Russia. “In line with the sanctions, we are suspending our business in Russia and also pausing the sale of all services and products,” he wrote Thursday. Existing customers not covered by the sanctions, however, would “continue to be served within the framework of contractual agreements,” a spokesman had added. There will be no new business for the time being, he added. The SAP spokesman did not say which specific businesses would be discontinued. According to media reports, SAP customers in Russia include Sberbank and the airline Aeroflot.”

So, it is not unimportant how the providers of software for use in engineering and generally in business are behaving now. Perhaps customers in this country need to help them understand this importance?