The way to Industrie 4.0 involves the trial, testing and skilful combination of novel methods, concepts and technologies. To this end Fraunhofer IPK has developed the »Smart Factory 4.0« demonstration cell which uses batch size 1 production to make the modes of action, application cases and potential of smart data and  a digital factory twin tangible and researchable for R&D partners. In conjunction with a strategic consultancy portfolio and development of methods and tech- nologies, this is Fraunhofer IPK’s path to working together with its customers  for the realization of individual Industrie 4.0 solutions for product development and production.

Information as a production factor

Cyber-physical systems (CPSs) were first described in 2006 as the outcome of the development of embedded systems. It was their networking capability that chiefly dis- tinguished them from classical types of sys- tems. Over the next few  years,  this  gave  rise to the concepts internet of things (IoT) and Industrie 4.0 in Germany. Since its first usage in 2011, the term Industrie 4.0 has become synonymous with new develop- ments in the fields of networked produc- tion  and  industrial  information technology.

Two of the key tasks of Industrie 4.0 are the collection and processing of data from cyber- physical systems, and use of the information thus gained in the fields of product devel- opment and manufacturing – across the whole  lifecycle  of  a  product.  Starting with individual sensors, through equipment sta- tus and production line capacity utilization to networked manufacturing plants, intel- ligent production systems should exchange data and information, interpret it and feed it back into a networked autonomous process landscape. The challenges here range from issues of standardization and themes of IT security to development of business models and occupational and further training.

Ultimately the move to Industrie 4.0 can only be successful, if the individual needs of com- panies are addressed by a customized migra- tion strategy. With the »Smart Factory 4.0« demonstration cell at Fraunhofer IPK, a pro- duction line has been created on which all aspects of Industrie 4.0 can be tested and optimized in a myriad of ways. The aim is to identify the modalities and interactions of information technology as well as the potential of cyber-physical systems and digi- tal twins for industrial application, and to work together with customers to develop strategies for their introduction at the com- pany level.

Picture 1: In the »Smart Factory 4.0« demonstration cell a modular batch size 1 production line has been built,
both physically and virtually in the form of a digital twin.

The »Smart Factory 4.0« demonstration cell works with the scenario of the manufactur- ing of a drinks coaster whose form, material and color can be freely chosen by the cus- tomer and which is then either manufac- tured directly or by tele order. The product, which the customer can configure over a web-based interface, can be specified as an individual part or as a unit, both of which open up different pathways through the production process. The demonstration cell consists of three modules arranged first in a fixed, then in a variable order in space and which are interconnected with one another through media and information technol- ogy. The product structure, process plan and control program are fully automatically generated from the product specifications. Generation includes G code CNC program- ming for machining, unit numbers on RFID chips, control of the clamping jigs, logistic and quality control processes and derivation of the assembly plan. 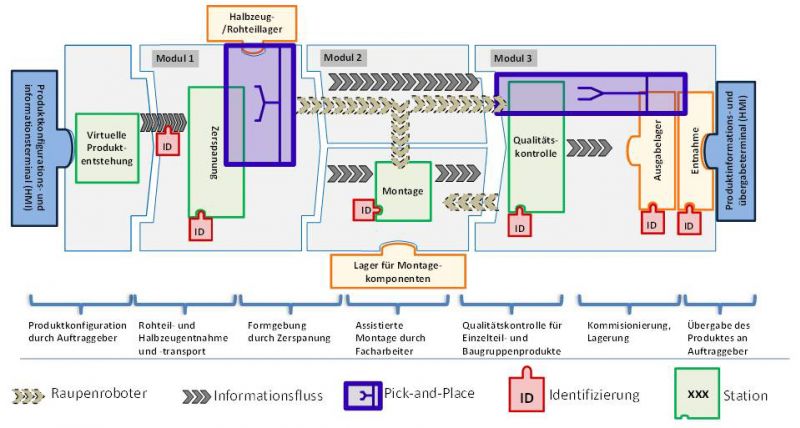 Picture 2: Schematic construction of the »Smart Factory 4.0« demonstration cell with its three modules for machining, assembly and quality control.

Depending on the particular order, the blanks are brought into the desired shape at a milling station. A camera-based quality control unit checks product characteristics like form, dimensional accuracy, material and color, and sends defective parts back for re-milling. At the same time, deviations are continually fed back into the automatic G code generation in order to achieve continu- ous improvement in the production process.

Once the individual parts have been inspected, they are taken to the assembly workstation by an autonomous crawler robot where they are assembled by the technician following assembly instructions dynamically generated per display, head- up-display or pick-by-light. The final assem- bly is re-checked for quality, moved to the output depot and then to the withdrawal station after identification of the customer.

Other extension levels of the demonstration cell provide for the manufacturing of cyber- physical systems themselves, whereby the customer-designed drinks coaster becomes an intelligent product equipped with move- ment and temperature sensors. Furthermore, it can also store information about its own manufacturing. But not only that: it also receives network and internet access which means that it can engage with a variety of services depending on user behavior.

Communication for the exchange of process and planning data is provisionally based on software interfaces such as OPC-DA, and later also OPC-UA, via WLAN, RFID and Eth- ernet, EtherCAT as well as other industrial bus systems like ProfiBus or ProfiNet. Yet the demonstration cell also serves as a test envi- ronment for new protocols for the internet of things, and in particular the constrained application protocol (CoAP).

The digital twin, which here comes in the form of a kinematic factory model, enables the fusion of real production with digital planning and simulation tools. Any changes, whether they be in virtual or real space, are bi-directionally synchronized between the demonstration cell and its digital twin. In this way, autonomous processes in the dem- onstration  cell  itself  can  be  secured in advance and thus remain transparent for people. The digital twin generates informa- tion and perceptions that are relayed in-the- loop to the machines themselves, their oper- ators, users and to product development. A web-based smart data dashboard has been specially developed for this which visualizes all relevant information and enables intuitive interventions in the production process. This then makes it possible to develop and oper- ate robust CPS networks.