At the press conference during SPS in Nuremberg on Nov. 8, 2022, Rainer Brehm, CEO of Siemens Factory Automation, presented his company not only with new products and services, but especially with interesting openings regarding software technology. Siemens supports the Kubernetes standard and container technology. Probably the most important news concerned the Xcelerator and Industrial Edge.

Until the summer of 2022, one could have the impression that Xcelerator was primarily a new name for the entire portfolio of offerings from Siemens Digital Industries Software. In other words, nothing new. Now the project is turning out to be the cornerstone for an open, modular business platform. Siemens supports standard APIs (Application Programming Interace) that enable partners, customers and developers to communicate directly with Siemens IT.

In this way, the MindSphere cloud platform, the Mendix low-code system, and the rapidly growing number of cloud-native apps and services will become important pieces in the mosaic of a new overall picture in which the focus is no longer on one brand or another, but on enabling the optimal mix for industrial customers. Photo (Siemens): Rainer Brehm, CEO Siemens Factory Automation

Siemens reported a growing ecosystem of partners working together on this basis. One example during the trade fair in Nuremberg: With blue automation GmbH, Digital Industries World e.V., Mytra, Wireless Consulting and Zscaler, it was shown how cooperation across company and sector boundaries generates added customer value.

The main theme of the path to “Totally Integrated Automation (TIA)”, which began 25 years ago, is now called “Convergence of OT and IT”, i.e. the merging of Operation Technology and Information Technology. And here, too, Siemens is taking the path to open standards, via which production employees can work with IT specialists to advance the fusion of IT with data use in the sense of an Internet of Things. In addition to APIs, the container standards Docker and Kubernetes were mentioned, which are now officially supported by Siemens. 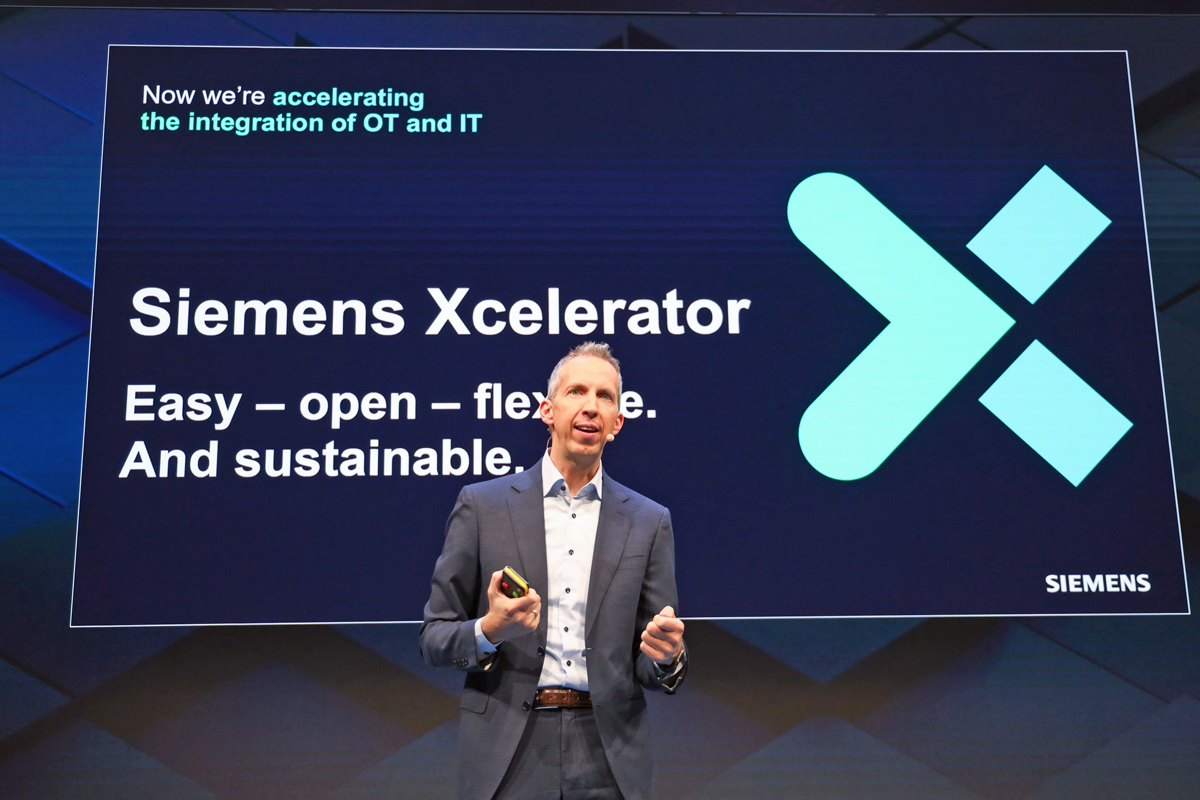 The press release states: “For example, look at the new Industrial Edge Management System V2.0. It is available for the open-source Kubernetes system widely used in IT for managing container applications. Siemens is thus addressing the increasing number of IT users in industrial production. They can now easily integrate Industrial Edge into existing Kubernetes clusters and thus manage automation on the shop floor in a more IT-oriented, efficient and simple way. Since computing power can be flexibly allocated within one or more Kubernetes clusters, companies save IT resources and thus energy and costs. This is now possible with Industrial Edge.”

Corresponding innovations were also announced for TIA Portal, originally the tool for OT and thus initially primarily for production planning and control. Siemens cites the IT-oriented approach of SIMATIC AX as an example:

“This means that IT users can now also program engineering functionalities in Visual Studio Code. Mechanisms such as Git versioning, unit testing or object orientation are available to them. The libraries created in Structured Text can then be seamlessly integrated into TIA Portal. Since SIMATIC AX is also cloud-based, it can be quickly and easily downloaded and updated anytime, anywhere.”

One of the largest suppliers of monolithic systems is pushing open standards. The direction is right.

← Previous News: GEC and Scheer PAS: Strategic Partners for Digitalization of Manufacturing Next News: The Role Of IBM And Red Hat For The Development Of Composable Software →