Founded in Florida a year ago, first becoming known as a buyer of German industrial software companies at the end of 2021 – there is news from Revalize again, and unfortunately again nothing good. As reported by the Recklinghäuser Zeitung (RZ), keytech Software, a company of the acquired PROCAD Group, is to close its doors at the end of March 2023. 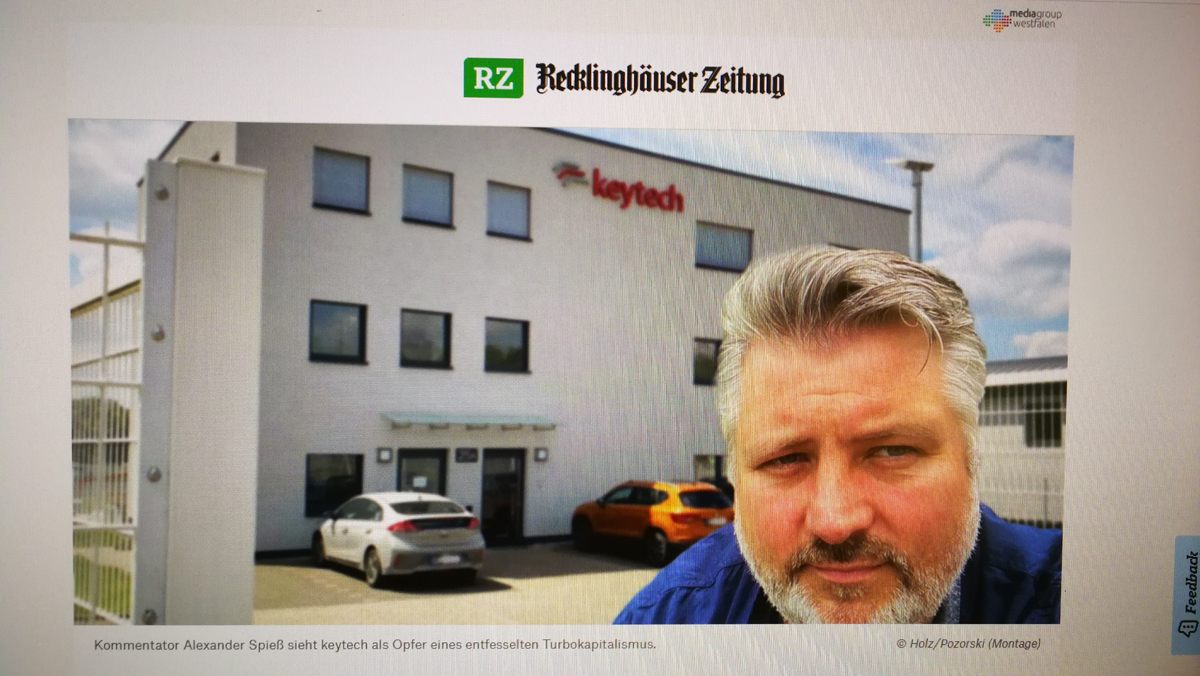 Under the picture in the screenshot of the RZ+ Abo article, it says: “Commentator Alexander Spieß sees keytech as a victim of unleashed turbo-capitalism”.

The RZ reported on Saturday, June 4, about “news with a shock effect”: “At a meeting in the Düsseldorf Hilton Hotel with representatives of the new US-American shareholder, it was supposed to be about getting to know each other. But the members of the works council of the Suderwich software company keytech were told the end of their employer.”

When the big buyout by Revalize began last year, the PROCAD Group itself had only been around for a few months. And as the old and new owners of the companies involved assured me at the time, the merger was supposed to lead to a joining of forces over the course of a few years, at the end of which customers of all involved could migrate their installations to the latest and greatest of the assembled technologies. With Revalize it is a different story.

According to RZ, keytech Software was reportedly in the black “and would have continued to be viable even without a takeover”. Founded in 1996 in the Ruhr region and successfully managed until the end by one of the founders, Dr. Reiner Heimsoth, had 80 employees. The company was – like PROCAD in Karlsruhe – one of the few German software houses that developed and marketed software for the management of product data and for the control and optimization of industrial core processes, primarily for medium-sized industry.

The abrupt end of the company was certainly not what the founder had in mind. RZ reports that he “is said to have already been released from “Revalize” and to be leaving the company shortly anyway. Heimsoth is very unhappy about the development, the company says.”

From the managing director EMEA at Revalize, Marc Maurer, who was appointed only a few weeks ago, concrete answers to my questions could not be obtained. Instead, I received a long e-mail with a lot of nice-sounding words, from which, however, I should not quote in any case. Answers to my questions were announced by the new PR agency of Revalize. So far nothing came. At keytech Software nobody could – or was allowed? –  to give me any information. And there is no official announcement from Revalize so far.

What is currently happening with keytech should not only be a lesson for the IT industry. In these years, many founders and owners of medium-sized companies are nearing the end of their active professional life. In the absence of a successor to follow in their footsteps, some give in to the hope that their many years of successful work – Dr. Heimsoth was managing director for 25 years – will not only be gold-plated. The sale is also intended to further develop the solution for the growing clientele. And the employees should have a secure future.

But who brings his enterprise to the market, he lures money looking for money again. But in no way does he attract expert successors who are interested in the company. On the contrary. What happens to the employees and when they have to look for a new job is a question of cost and profit accounting.

Perhaps the sad end of keytech Software will help some former entrepreneurs to think about a better way. A management team should be established in good time, which – perhaps via a management buy-out – could even help to gold-plate the foundation and many years of successful company management. Perhaps this will result in somewhat less money than if the company were handed over to an investor. But for the company, its products and its customers, it will certainly be considerably more.