An editor-in-chief at WEKA Fachmedien says goodbye in an e-mail to friends and acquaintances with the subject “Ich bin dann mal weg – I’m off then” (screenshot Sendler). Anyone who tries to reach him at the phone number listed under his farewell letter learns that he no longer exists at WEKA. No number, no e-mail address. Gone. And if you look further to find out from whom at the publishing house you could get some information about what’s going on, you’ll find out that it’s not just one person who’s gone, but a whole series of people.

In the middle of last year, WEKA Holding was taken over by the private equity firm Paragon Partners, based in Munich. It has specialized in acquiring and doing business with medium-sized companies in Germany since 2004. A new, lean cluster-based structure will be in place starting in February, writes the former editor-in-chief, in which “the brands Markt&Technik, Elektronik, Elektronik Automotive, DESIGN&ELEKTRONIK and Medical Design will be combined in an electronics cluster.” Of course, you don’t need as many editors, layouters and ad salespeople for such a cluster as you do for the individual brands. That’s why WEKA Holding CEO Wolfgang Materna’s statement last summer that he saw “the future of WEKA, our employees and our business partners in good hands” was pretty empty talk. “The management and employees of the WEKA Group will give their all for the successful continuation of the business, even in the new shareholder structure.” He should have said as far and as long as they are needed anymore. 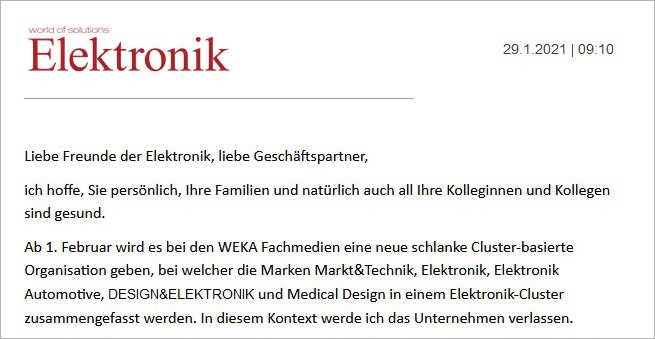 The trade publishers have long had a problem. Their business model – content placement and PR versus ad placement – has been a model in danger of rapid extinction for about 20 years. Ads are dwindling because many companies believe they are in the comfort zone where they can do everything themselves online. Definitely cheaper somewhere online. Print media? Old stuff. Ads? But only if they are best tailored to the person desired as a lead. This can be done primarily via the new business models successfully implemented by the U.S. corporations with the well-known acronym GAFA, i.e. Google, Amazon, Facebook and Apple. Data theft in exchange for personalized advertising. These corporations are very far away from specialized media. And the GDPR makes it doubly difficult.

German trade publishers have a big problem, because the switch to online media, which then also bring in profits, is by no means to be had for free. Many a publisher or publishing director thinks like many a medium-sized mechanical engineering company: If it no longer brings in enough money the usual way, then I’ll just close down.

In September 2020, Henrich-Publikationen, which was only taken over by Carl Hanser in 2010, was closed down. Is WEKA going the same way? In any case, the remaining publishers don’t have much time to adapt their business model to modern times and reposition themselves. It would be a shame not only because of the many jobs that are still being lost. It would also be a pity for many a magazine that will be missing.