On March 29, 2021, the Karlsruhe-based software provider acquired a majority stake in ACATEC. Already at the start of a closer partnership in January 2021, enormous synergy effects had become apparent for both sides. Johann Dornbach, CTO of PROCAD, therefore calls the acquisition the next logical step.

“Our companies operate in very similar spheres,” says Johann Dornbach. “The initial partnership quickly turned into an operational collaboration. We noticed that by integrating both solutions, the processes at our customers could be accelerated many times over, for example in CAD automation. So, we just had to take the step and connect in the long term.”

Henning Bitter, Managing Director of ACATEC, confirms, “The partnership with PROCAD showed us very early on that the collaboration can accelerate customer processes by up to 20 times. In addition to increased visibility in the market, ACATEC benefits from a strong parent company and its expertise in product lifecycle management.”

What is new about the merger for industrial customers? When asked, Johann Dornbach describes a typical case: a manufacturer of a production plant is asked for a quote. A large machine already operating in Germany is to be given a counterpart in India or Africa. The products will look a little different there, the degree of automation in production is lower, but essentially the components of the machine are the same. It is therefore a variant of the one already delivered.

For the machine manufacturer, this means that for all the parts that must be different, engineering may start with the design, and for the overall machine, the assembly, including the new parts, must be defined. This, of course, enters into the calculation and time planning before a quotation is prepared.

With speedmaxx from ACATEC, this process can be shortened dramatically because a large part of the variant design can be automated. Using the example of the conveyor belt shown, one immediately understands: Whether one meter long or nine meters, it makes a big difference in the number of individual components, in the dimensions of individual parts such as the conveyor belt and, of course, in material and assembly time, but it does not make it necessary to remodel the parts. What is necessary can be implemented via parameters at the push of a button.

Now, when the CAD models are specifically retrieved from the PLM system PRO.FILE, automatically adjusted and stored again as the desired variant, the creation of the quotation is actually possible with a few clicks, where previously days and weeks were necessary.

Customers of both companies should therefore benefit from an enormous synergy effect. The integration of the systems should be largely completed by the middle of the year. A merger of the two houses under one name is not on the agenda at the moment. The teams in Karlsruhe, Hanover and the other locations will continue to concentrate on their core business.

For Johann Dornbach, the scope of the offer to customers will change. PROCAD is no longer only responsible for the management of engineering data, i.e. for the path from the machine concept to the complete model of the entire plant over its entire life cycle. In the future, the company will also feel well positioned to automate the process, in which variants of a complex machine or plant can be defined, modeled and shown to the customer in a simulation together with the quotation. This is called “configure to order” instead of “engineer to order”. And configuration is now largely automatic. 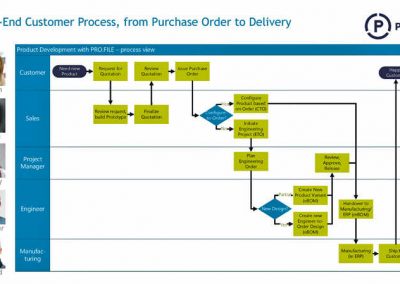 The overall process for offering a machine variant 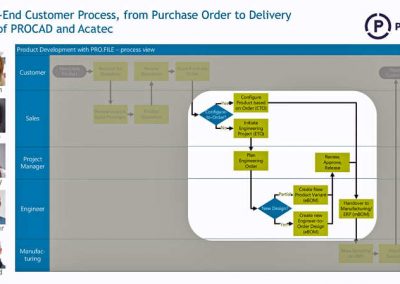 The part that can now be automated in the combination of PRO.FILE and speedmaxx 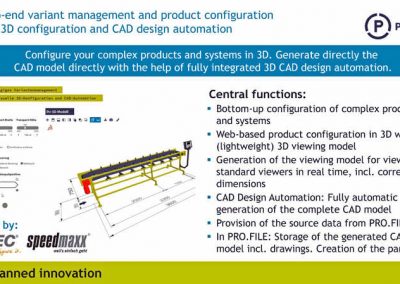 A conveyor belt in smaller dimensions 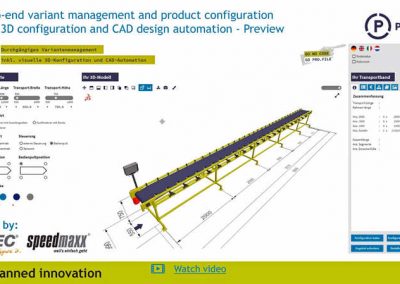 The belt much longer, so more rollers, more supports, etc.

← Previous News: What are you focusing on in your new position as managing director, Mr. Kurtaz? Next News: Kagermann And Wahlster Are Wrong: The Digitalization of Industry is Faltering →