Kagermann And Wahlster Are Wrong: The Digitalization of Industry is Faltering

In a joint article in the FAZ from 28 March 2021, two of the three initiators of Industrie 4.0 have expressed where they see the project some ten years after its launch. Very far ahead! But the article shows that they are applying the old standards. Increasing the efficiency of whatever processes is no longer the right criterion. But new business models with product-based services are still in absolute short supply in 2021. They only appear in passing in the article. I’m looking for comrades-in-arms for a new attempt.

Twice in the last six months, I have tried to find companies that want to position themselves as pioneers in terms of digitalization or digital transformation of the industry. I even secured a domain www.digital-industry.org for this purpose. Twice the search has come to nothing. The domain is not needed for the time being. 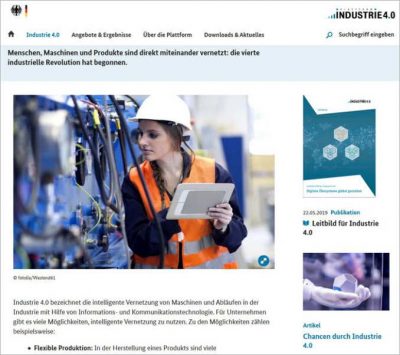 Quite obviously, very many companies in Germany – as well as in Japan, by the way – are already very far along when it comes to digitalizing their processes. From engineering to supply chain, there are hardly any work steps that are not already out of the infancy of IT support with fairly extensive automation. Industry 4.0 is being implemented in many companies. Self-driving forklifts, cycle-independent production islands, workpieces flown by drones through the hall to the machine – the future has indeed arrived in many places.

But the most important new services here are the automated old ones: Predictive maintenance instead of maintenance in case of failure. And that’s supposed to achieve the sustainability goals of counteracting climate catastrophe and conserving resources? Everyone knows that’s not enough.

The world’s most modern industries still operate according to the principle: develop, produce, sell – and do so as often as possible, because this is the only way to create the added value that keeps these industries alive. The principle of growth is still only questioned in some talk shows. Not in the executive suites of the corporations, not in the associations, not in the governments.

The only way to move away from this kind of industry that endangers the future and toward one that does business in harmony with nature and people, is to create new business models based primarily on product-based services. Services that are offered in addition to the washing machine, the car, the packaging machine. Services based on products that were developed from the outset with the aim of making such services the core of sales. 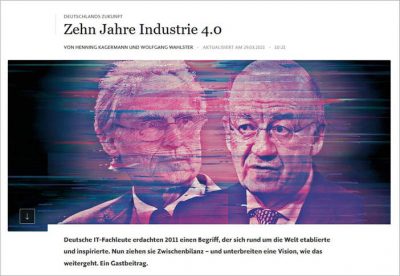 But what do Kagermann and Wahlster write about Industry 4.0? For example, this:

“The vision was convincing because it promised considerable progress for the economy and society. Economically, it was initially about a shift from traditional automation with predetermined outcomes to learning and self-adapting machines and environments that respond in real time to changes in customer demand as well as to unexpected disruptions. This is accompanied by a move from mass production to custom manufacturing, to competitively priced production of individual, customized products.”

This is nothing other than the reduction of the digital transformation to the more intelligent use of IT for a further increase in production efficiency. The fact that not only mass production, but also its individualized form, can be mastered well and profitably in this way changes nothing about the principle of industrial management.

Artificial intelligence now leads to one next step, is further explained in the said article:

“With industrial AI, a second wave of digitalization of production is becoming possible. The first wave, which makes all production and supply chain data available digitally and mobile via cloud systems, is largely complete. This data can now be analyzed by AI systems in real time and interpreted in context so that it can be actively used for new value chains and business models.”

That’s probably the former head of the German Research Center for Artificial Intelligence (DFKI), Wolfgang Wahlster, talking. He has always tended to confuse the marketing bubbles from his institutes with industrial reality. I remember how in 2014, at the Institute for Production Systems (IPS) in Dortmund, he met with fierce resistance from the ranks of practitioners with such a speech in a conference. During the break, he told me that they were right. He was just the theorist. Honest, after all. But a theorist need not assert anything that is belied by practice.

To claim that “the first wave of making all manufacturing and supply chain data available digitally and mobile via cloud systems is largely complete” is worse than window dressing. Up and down the country, all I hear is that many companies want to contemplate such moves, but don’t have the slightest idea how to do it with their products and production. Not to mention that many still don’t trust the cloud. Especially not if it doesn’t have their servers installed around the corner.

And when they do have an idea that might be worthwhile, they are met with even greater skepticism and lack of acceptance on the part of their customers. They have now heard for decades, “Stinginess is cool!”. Who is surprised that this has an effect? Services from the cloud are supposed to feel as free as those from Silicon Valley. But this is not possible with services based on mechatronic products and smart machines developed and produced at high cost.

A new start is needed to take the next step after Industry 4.0: the shift from tangible to intangible value creation. I have formulated a short text on this: “Industrial policy – time is pressing!” The graphic accompanying the text comes from my book “Industrie 4.0 grenzenlos” from 2016 and is as up-to-date as it was five years ago. I am looking for comrades-in-arms.