Contact Open World 2022: A Pioneer In Composable IT In A Spirit Of Optimism

With around 500 participants, Contact Open World once again took place in Bremen from September 13 to 15 as a personal network of suppliers, partners and customers. The motto: “Shape the sustainable future now!” The well-filled and attended exhibition and numerous presentations offered plenty of material for intensive networking. (All pictures Sendler) 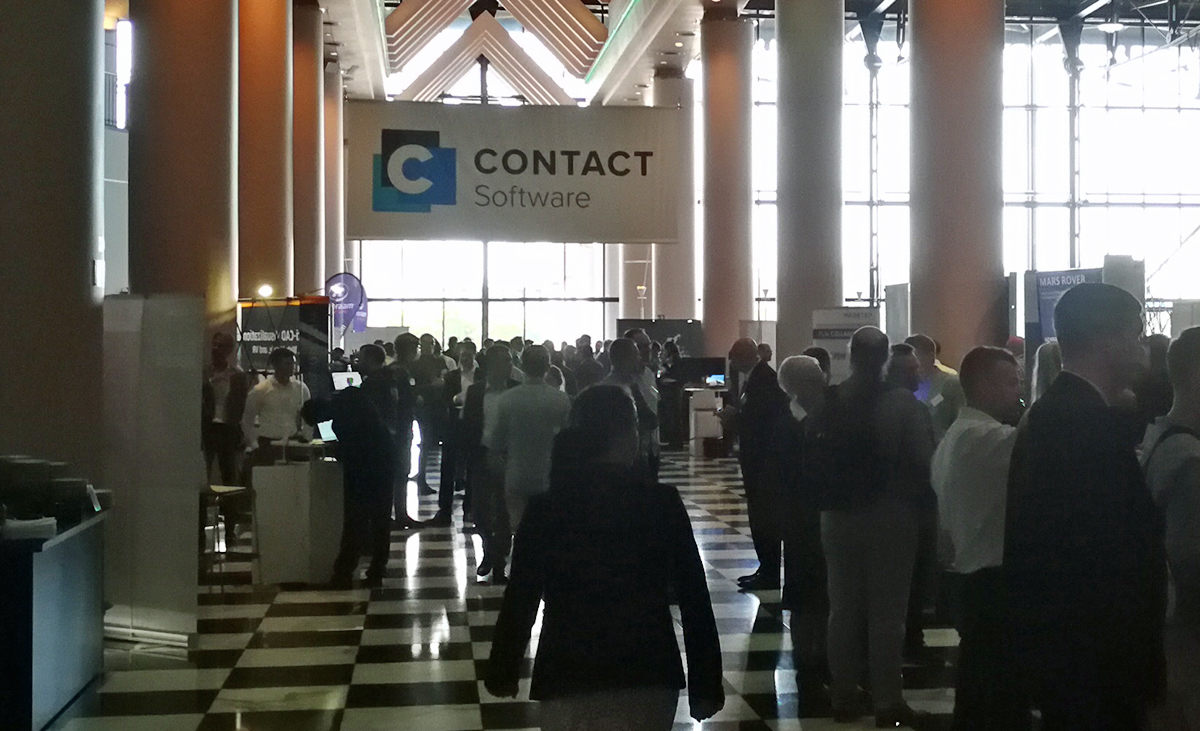 Many IT providers are talking about openness in IT today. Few have as good reasons for doing so as the software provider from Bremen, which has been transforming its systems accordingly for a good decade now.

It all started for founder and CEO Karl Heinz Zachries 32 years ago with PDM, which soon became PLM. Today, with reference to analysts such as Gartner and CIMdata – CEO Peter Bilello was on hand – he sees “PLM, in combination with IoT, AI and cloud, playing a key role in digital transformation. Flexible modular architecttures help to realize an end-to-end information flow based on digital twins and increase business agility.” (from Corporate Report 2022)

His eldest son Maximilian Zachries, member of the management board, opened the conference on 14.9. with a presentation of the strategy Contact intends to use to help the industry successfully respond to the overwhelming challenges of the present. He presented the Composable Architecture of the modular system, which has been called Contact Elements for years, as a pillar of the solution offering. The closed loop between PLM and IoT, including modern user guidance, is the other. 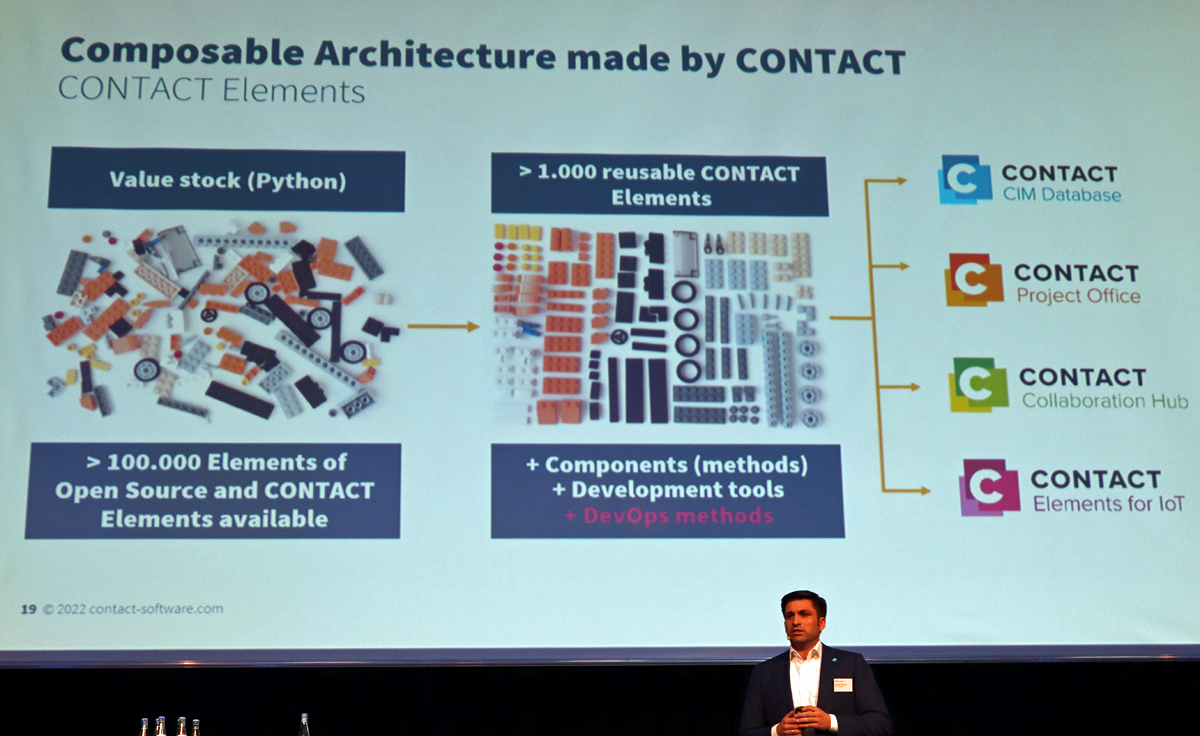 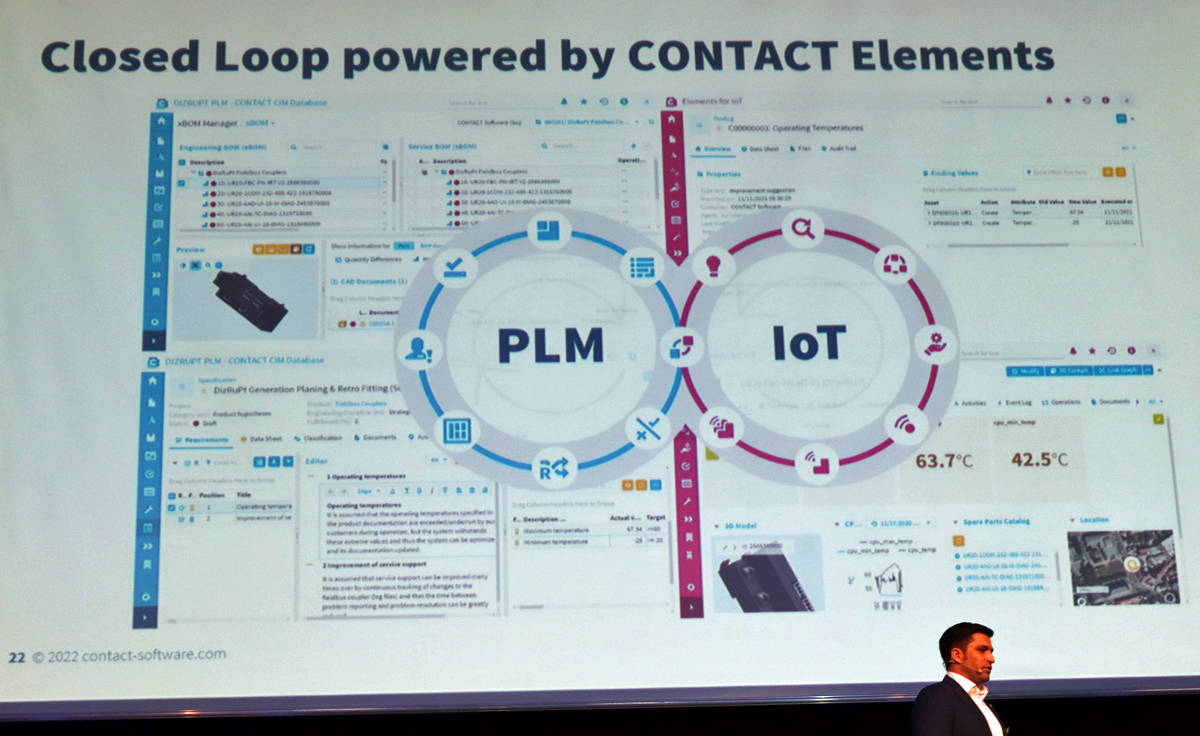 Frank Patz-Brockmann, who over the past decades as head of development has ensured that the software from Bremen is now also singled out by Gartner as a special example of systems that can be quickly changed and easily assembled, went into greater depth. He impressively described the modular, non-monolithic component architecture in terms of its special features: REST API, development with Open Python and Eclipse, and low-code as core elements.

Contact Software now has more than 450 employees. Software development alone is targeting 150 specialists in the coming year. A German, family-run company in the industrial SME sector is proving the opposite of the assertion often made on talk shows that Germany is hopelessly out of touch when it comes to software and AI. In Bremen, the opposite could be seen. The major international players in industrial software have only realized in recent years how important it is to align their entire architecture with the Internet and the cloud. The Contact Elements have already undergone the corresponding restructuring. 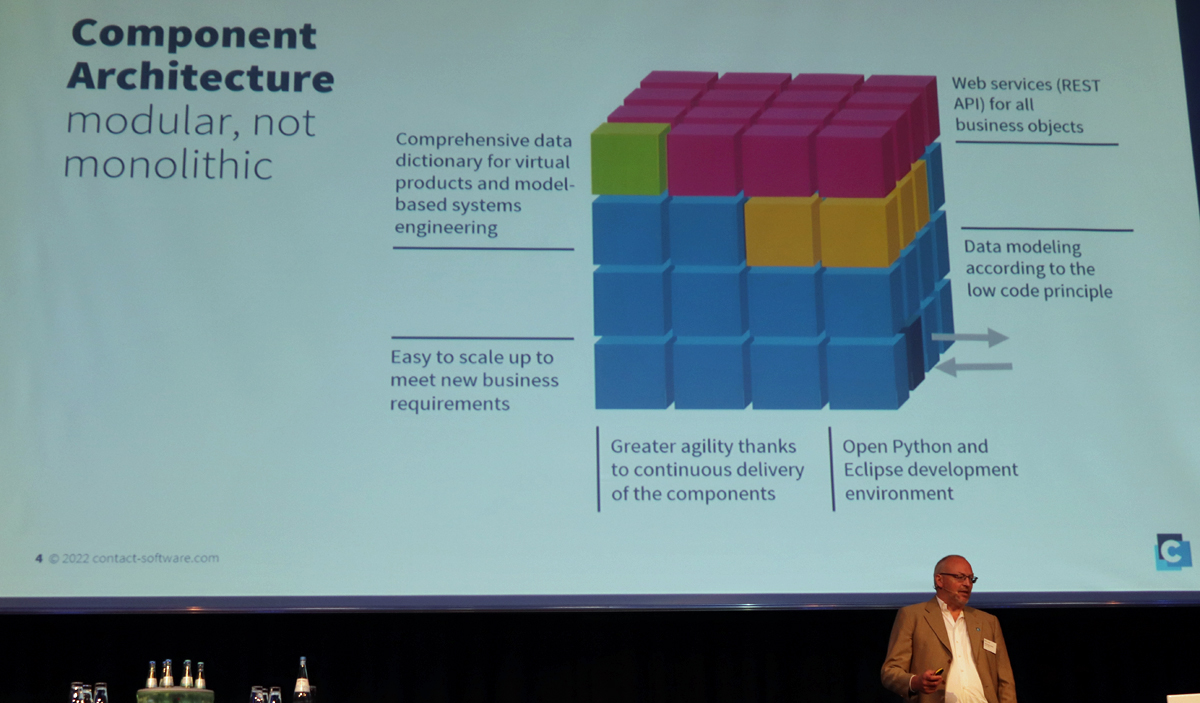 Demand is also increasing internationally, as Michael Murgai, who is also responsible for the global partner network, toild while gathering the most important partners on stage. Asia, America, Europe – demand is rising rapidly, and despite all the crises, this was also expressed in numerous journeys by air over more than 15 hours. 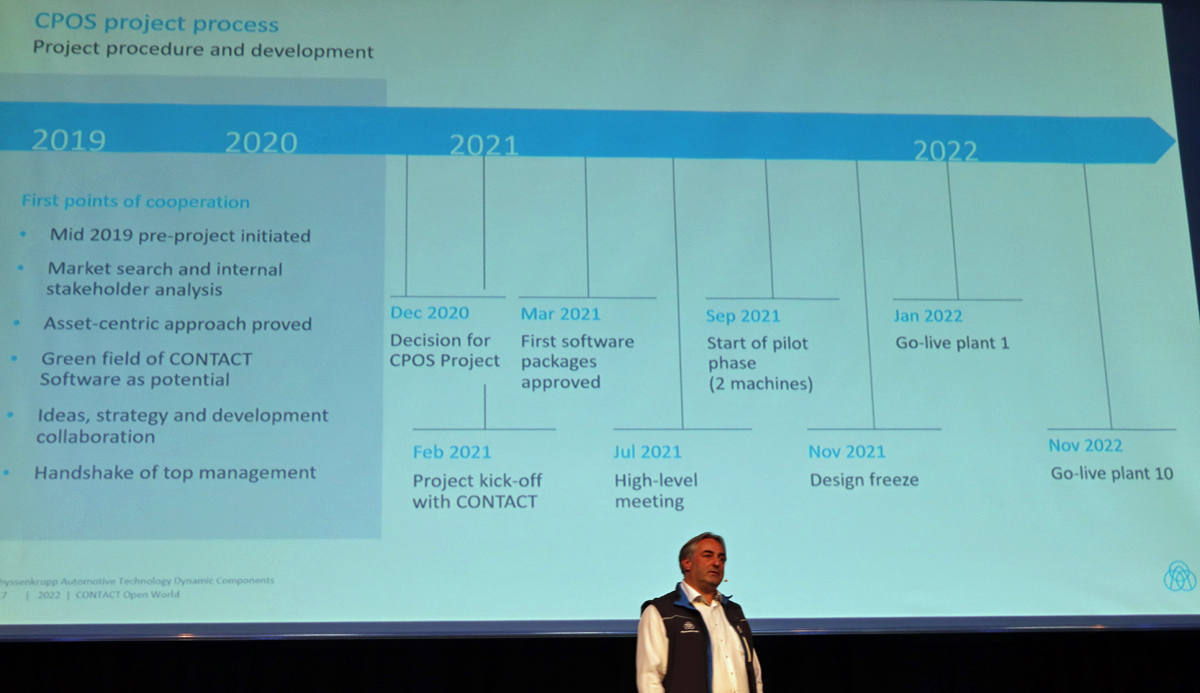 One of the most impressive customer presentations was given by Thomas Binder and Alexander Langer from Thyssenkrupp Dynamic Components, a leading global manufacturer of camshafts, rotor shafts for electric motors and other components for almost all well-known automotive manufacturers. There, they were faced with the task in 2019 of switching to digital methods in production and maintenance within a short period of time in order to accompany customers in their tremendous transition from carburetors to electromobility and in their digital transformation. The final goal was to move away from paper worksheets and cumbersome adjustments to processes toward the greatest possible flexibility and transparency. And this in ten plants worldwide. The decision was made in favor of Contact Software.

A new system was jointly designed that has little to do with conventional MES systems. It is called CPOS, and the abbreviation stands for Centralized Production Operating System. The project timeline shown here is astonishing: From kick-off in February 2021, it took less than 12 months to the first go-live in January 2022, and by November 2022, the last of the ten plants worldwide will have converted its production and maintenance to CPOS.

In addition to partner companies and system integrators, a number of research facilities and institutes that cooperate closely with the software house presented themselves in the accompanying exhibition. All in all, it was a successful event that conveyed a pleasing mood of optimism.